A bit of planning leads the long way. I was planning to celebrate my big birthday, inviting 7 families to our tiny townhouse. So I decided to utilize all spaces available, including garage, front- and back- yards, as well as all indoor spaces. It was unpredictable April, so I could only hope the weather won’t let us down. We all love dress-up parties, so I announced the theme – Cannes Film Festival. Yes, it could have been a standard Hollywood party, but I love to be different. The guests had to dress up as any famous character. As examples, I mentioned in the invitation Red Riding Hood and Men in Black; Elvis, Marilyn, and James Bond, as well as Sponge Bob Square Pants and SouthPark Cartoons characters.

I announced the program of the movie themed birthday party in advance. It consisted of the following:

I requested guests to bring camping chairs, blankets and sleeping bags for the kids, as night cinema was planned to be held … outdoors! ding too much time and money on décor, so I limited expenses to buying red carpet (eBay), aluminum film foil, gold ribbon and golden balloons (local party store). Together with my children, we prepared the prizes. We made Palm de Ore out of a gumtree branch, covered in gold acryl paint. I printed Cannes Lions silhouette, cut it out and glued to the piece of carton wrapped in silver foil. Other prices were more utilitarian – bottle of wine for the best actor, bottle of hot chili for the best director, and so on. To feed the big company, I ordered a ready-made roast with potatoes, and two big cakes. The rest of the menu was finger foods from the local butcher and standard set of cheeses, dips and snacks from the supermarket. It’s not about food, after all, it’s about having fun!

The party started with a big surprise – guests arrived in a white limo! The driver had to do several rounds to bring everybody in, and I could only lough looking at the arriving stars. Out of the limo came: Five minions (a big family!), two Austin Powers, Lara Croft, Audrey Hepburn, and the Mask, to name just a few! Paparazzi was working hard getting the best shots of the stars.

After the photo session and snacks, the real fun started.

I split the guests into tw 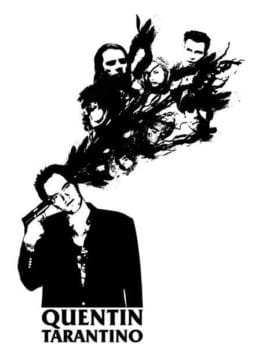 o film crews and gave them the task to make a movie.
The first crew was directed by Tarantino, and the second one by Fellini. I deliberately split couples so that no one was together with their spous 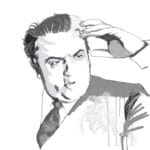 e in the same team.

The plot for the movie was simple:
Bad guys kidnap the main character. The good guy saves him / her. Happy end.

Tarantino with the crew was filming on the front yard, while Fellini with his actors used our tiny backyard. Camera operators used smartphones to record the movie.

We suggested to the kids to do their own movie as well, but they were happy playing their own games, so we left them alone for the time being.

After the shooting, I invited the guests into our outdoor cinema to watch just created films on a big screen. The screen was gorgeous. It was an inflatable movie screen, which I inflated with a small air blower – same used to inflate camping airbeds. It went up in several seconds – all children got absolutely exited, seeing it go up. You can imagine how many “wows” were in the air! 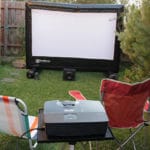 supplied with the outdoor cinema system (available via Smart Digital Australia) had an HDMI input, which allowed me to connect laptop with our movies and project them to the big screen. All seven families with a dozen of kids could view the show comfortably! The sound was also very descent – clear and loud, with good base.

No comedy in the world would create that much laughter we had watching ourselves acting!
Fellini used toddler’s car as a vehicle for the villains, kidnapping Red Riding Hood. Tarantino’s bad girls, on the other hand, managed to kidnap Big Bad Wolf, who was later on saved by Minions.

After the show, hot food was served.
Traditional awards ceremony of our local Cannes Festival brought loads of glee as well. The Mask had prepared witty descriptions of the nominations, everybody had a chance to deliver the acceptance speech. No wonder we had another wave of laughter.

End of the party

It was getting cold, an 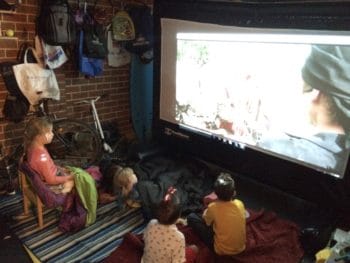 d the outdoor cinema was moved to the garage, where children watched Princess Bride. They loved this improvised camping experience. They were sitting in the camping chairs, wrapped in sleeping bags, in the dark of the garage, with popcorn in their hands, watching an old movie. It was so different to watching TV, and it was so much more romantic than going to the cinema.

A couple of teenagers choose to sit on the other side of the screen, watching the movie as if in the mirror. The screen fabric was made of lycra, and the quality of image was equally good on both sides of the screen – so why not? Meanwhile, adults were having a disco party, dancing to the music of the slightly older times, when they were a bit younger, and were going out till early hours of the following day. The Birthday Party was getting to the end.